Once in a while we will publish an old article from a previous edition of pantheon//. This week’s article was written in April 2003, relating the theme “identity”.

“What is ‘Dutch architecture’? Is it any different from Italian, American or German architecture in this time of globalization? If it really has her own identity, how would you describe and explain it?” We asked several foreign architects, specialists and students to give their opinion on Dutch architecture, urban planning and the Dutch way of designing and teaching. What is considered to be ‘superdutch’ according to foreigners?

La Dutch Touch? The way a Nike shoe is immediately recognizable, Dutch architecture is probably too. Sometimes to the extent to wonder if Dutch architecture is just formalistic? Folding floors and surfaces, undulating ceilings, coloured glass and hanging boxes. In a society whose only desire is consumption isn’t everything about form? Our buildings like our toothbrushes? The sketch, by NL architects, is to me what Dutch architecture is all about. The insertion of the disturbing, the non – conventional and the extravagant. The visual is a way to interact and to promote discussion. More than just the way it looks, Dutch architectural identity is to me, that amazing drift to question, to search and play in order to interact with our reality.//

Why Dutch Design Matters. Dutch design is so good because the whole country is architecture. This is a densely populated piece of real estate that has been wrested from the ocean and the rivers over the last millennium, and has to be continually preserved through the application of a great deal of technology. The water has to be kept out of sight and away from this land that would otherwise be sea bottom or swamp, and so there is no visible nature against which to judge what man and woman have done. Instead, on the flat horizon one sees only an artificial reality that has to be continually remade, rearranged, preserved, protected and transformed. The Dutch can’t escape over the mountains or into the suburbs to create a new home for themselves they have to reuse and densify, and thus hybridization and h and multiple uses of spaces dominate in architecture and urban planning. Infrastructure, from the rhythm of irrigation ditches to the large road and railroad projects currently under construction, defines the overall appearance of the landscape that the Dutch make through these efforts.

The Dutch, extremely conscious of their space, engage in a great deal of research, debate and discussion to figure out how best to arrange their little artificial reality. There is an agency dedicated to nothing else that collecting statistics on spatial use, there are generous subsidies for publications and studies, and there are local architecture centres in almost every town and city. There is even a complete government agency dedicated to social Housing, Spatial Arrangement and the Environment. And then there is the Netherlands Architecture Institute, which is dedicated to collecting and preserving the documentation of the built environment and to making exhibitions, as well as engaging in other activities that expose Dutch architecture, in order to support a debate at an international level about the current and possible future states of the physical world we all inhabit.//

New as a value. Italy is a place where beauty is everywhere around you; it is present, in the landscape, in the monuments and in the way Italians enjoy food, life, everything. But Italy is the place of the past, while Holland is the place of the future. Dutch landscape is simple: horizontal, green, a kind of “tabula rasa”, where everything and anything can be built. It is a perfect soil for many different architectural experiments, any shape or colour, any different concept. Here people are curious and can experience much and travel a lot for very little money. This freedom is clearly reflected in Dutch architecture where young people have the power to create. You can feel it at the University of Delft, where teachers really trust the potential of students and accept new ideas and expressions, where ‘new’ sus good and a value. // 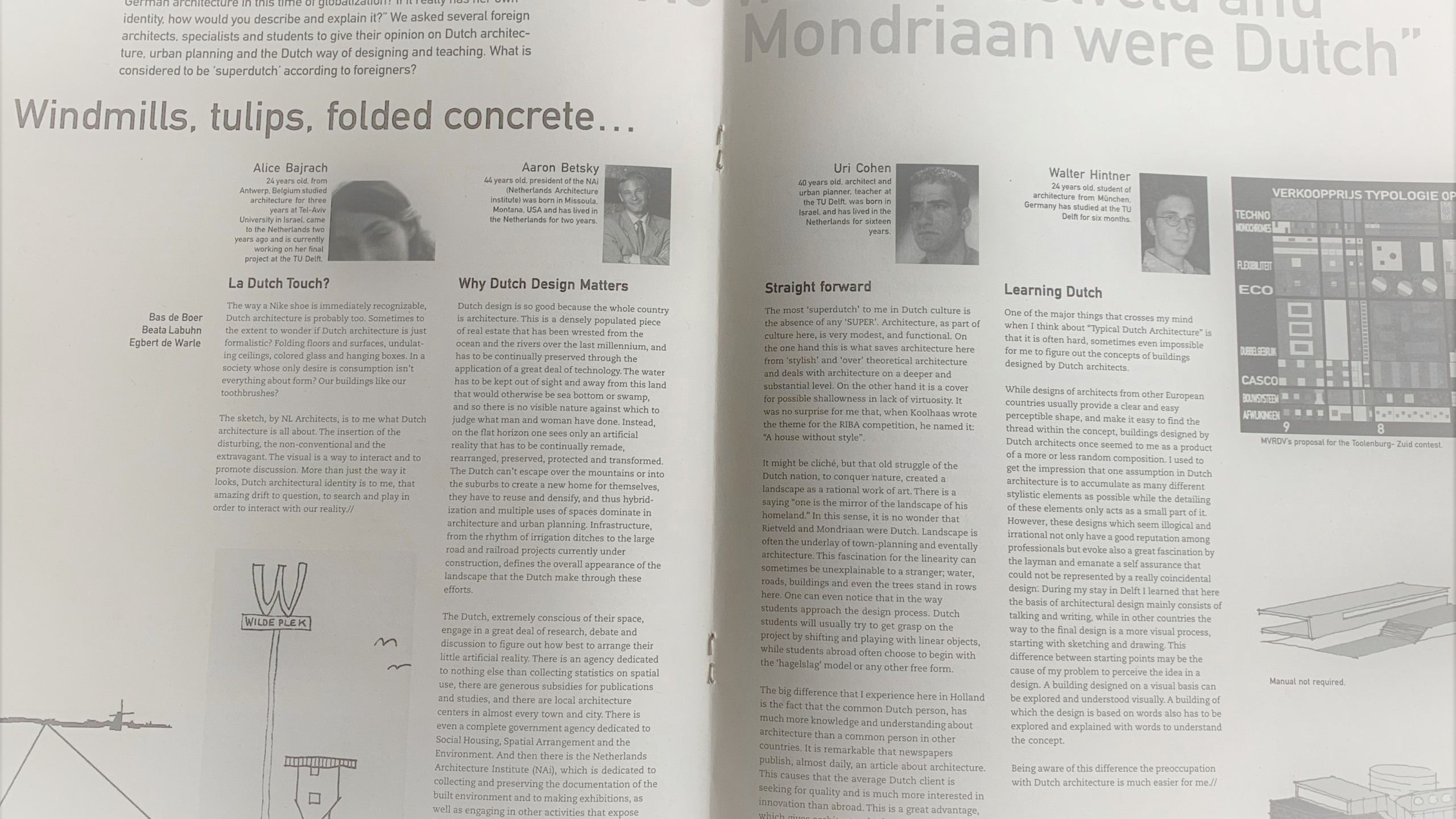