For ‘What If Lab: a circular train station’, the commissioning parties were looking for innovative ideas, concepts and designs that embrace circularity for Dutch train stations. Welling Architects developed the concept of the natural train station, in which we try to reduce the impact of a train station as much as possible by replacing the conventional station layout by a natural one.

A train station is not defined by the physical appearance of it, but rather by the services it provides: It facilitates getting in and out of the train and the transit to other modalities, as well as places for waiting, encounters and consumption. The question we asked ourselves was: can a train station be facilitated in a natural parklike environment?
We aimed to design a landscape park where a train station could be hosted. Natural elements are put to use to create a pleasant atmosphere while at the same time enhancing the efficiency of the station. A variety of landscape elements shape the natural station and guide the traveller to the platforms.

Natural elements as an instrument to guide travellers

Various types of vegetation are applied to influence traveller behaviour:
Tolerant vegetation; these consist of fields of low robust vegetation types like grasses, flower fields and ruderal vegetation (herbal species). It divides the station into zones while at the same time it invites for alternative recreative use.
Imperative vegetation; these are zones of mid-high rough vegetation, shrubs. They form a barrier in the landscape and thereby influence the traveller flows.
Guiding vegetation; these are route-lined rows of trees that improve orientation while preserving oversight on ground level, as well as noticeable singular trees that stand out and mark significant places within the natural station.

Instead of asphalt or the standard cement tiles, gravel will be used for the roads and platforms. Gravel is a sustainable alternative with natural appearance.

The diagonality and crossed layout of the pathways ensure that from every arrival point at the station there are multiple equally long ways that lead to the platforms, irrespective at what platform one needs to be or from which side one arrives at the station. From each point in the station, multiple possible roads can be chosen, that are equally long and each end up at a different point of the platform. This ensures that the stream of travellers is spread over the length of the platform, thereby increasing the efficiency of the station; not all passengers will try to enter the train through the same door.

The design of the public space and the station furnishings depict a strong contrast between sharp and rounded corners and edges; sharp corners force the traveller to choose between direction a or b, it splits the space into two diverging directions. Whereas rounded corners allow the space to flow over into a wider area, thereby encouraging to spread out. Sharp corners are imperative, rounded corners are soft and motivating. These design aspects are intuitive and aid in influencing traveller flows and behaviour, while at the same time it plays part in defining the station’s identity.

Not all components in a station can be replaced by 100% natural elements. Due to strict norms and regulations, artificial intervention is inevitable. For these interventions we make use of local renewable resources and reuse of existing materials – according to the principles of circular construction.

For stairs, pedestrian bridges and retaining walls, existing train track materials have been applied. For balustrades, signage objects, seating objects and pavilions we make use of local renewable resources such as rammed earth, cross-laminated-timber out of indigenous fast-growing wood species, musselgranulate (replacement for non-structural concrete applications) and reed. We collaborated with Studio Tjeerd Veenhoven, who develops these sustainable material innovations. 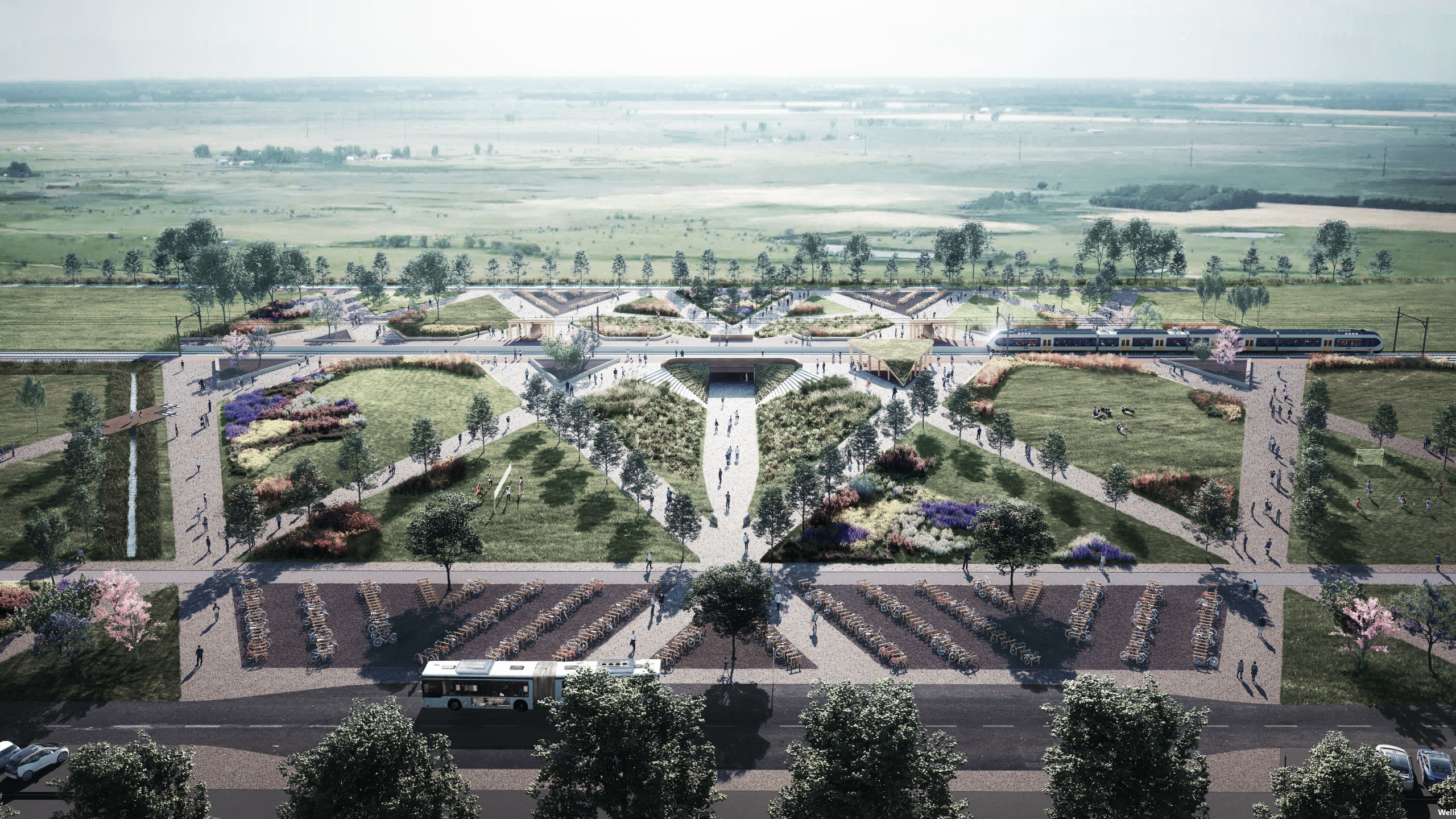