From the first day of our architecture studies we are trained to design homes. We learn how to shape a building for people to cook lasagne, binge watch their TV series, sleep in late and come home to. But it is never about people who do not have their own oven, television or even their own roof. For a long time the homeless problem has been out of the picture, not merely for the government, but for architects as well. It is time to give them the attention they deserve.

The number of rough sleepers in the Netherlands more than doubled in the past decade, going up from 18.000 in 2009 to 40.000 people in 2019. The extreme growth can be explained by multiple factors. Firstly, there is a huge shortage of cheap residences at the moment. Moreover, there have been cutbacks on mental health care since 2012 and the support after a prison sentence is insufficient. Those issues lead to a greater risk of slipping.

When CBS, the Dutch Central Statistical Office, came with these numbers, it caused great political uproar. Luckily, they took to the drawing table immediately and last year the Dutch cabinet reserved 200 million euros for tackling the homeless problem. According to them, this money is mostly meant for extra living space and assistance to get back on track. This is a great step after so many years of ignoring the problem, but we still have to see if the right strategy to get all the homeless off the streets is chosen. There is a tendency to come up with short-term solutions such as expanding the capacity of homeless shelters. This is understandable, given the fact that investments in rough sleepers mostly do not directly prove themselves profitable. However, studies and realised projects show that it is utterly beneficial in the long run.

The real solution of course is to give all homeless people a house. There is no other measure that would improve the lives of the homeless so considerably than giving them their own place to come home to. It would be the base upon which the rest of their lives can be built. And there would be yet another plus side. By investing in permanent housing for the homeless, money which would normally be spent on police, justice and care would be saved in no time.

Finland, for example, is the only European country with a declining number of homeless people. Since the 1980s, the homeless problem has been a continuous focus of their government. In 2007, they took on the Housing First Principle. The foundation of this principle is the acknowledgement that having a place to live is a human right. What follows is that the very first measure taken for a rough sleeper is assuring they get a permanent dwelling. In addition to this, he or she can get the support needed, but always as a choice. Increasing the supply of affordable rental housing was necessary. From the start of this project, the country has given 12,000 people a home. And as suggested before, following this principle turned out to be very beneficial. In Finland they found that with every person they housed, they could save up to 9,600 euros of society’s funds, normally spent on services, per year.

Homeless housing can occur in all kinds of forms. In 2013 a project was realized in Vienna where students and former rough sleepers live together. VinziRast-mittendrin consists of multiple three-room apartments, in which mixes between the groups are made. Besides a small personal kitchenette, every floor has a common kitchen, which is shared by 8 to 9 people. There are three floors of these in total. The ground level provides other common functions, such as an eatery, a laundromat and a sewing workshop.

In the design of the building, the architects have taken into account the presence of two entirely different kinds of people having lifestyles of their own. To prevent tensions rising between the two different types of occupants, the architects decided to apply double access everywhere, allowing the opportunity to avoid one another on the stairs.

In Jankowice, Poland, you can find another example of homeless housing. Xystudio designed a building for homeless people who are healthy enough to live on their own, but are having difficulty taking care of themselves. In the common rooms are a chapel, offices, rehabilitation rooms, a common room and a canteen. Their own rooms are very small on purpose to encourage them to go outside during the day. This accelerates the resocialization process. The architects integrated the function of the building into the materialisation: “We used ecological materials. Facades are made of rejected materials, a bit like these people, picked up from different places.”

By reserving 200 million euros for the homeless problem, the Dutch government has taken a first step. Now is the time to spend the reserved money wisely. Although investing in permanent housing for the homeless may seem expensive, it proves to be very profitable. Even more important, it will improve the lives of homeless people drastically. Not only the Dutch government but also we, as future architects, could play a role in this evolution. By paying a little attention to this matter during our studies, we could design housing to support the development of these people and change their way of living. Everyone has the right to have a home.// 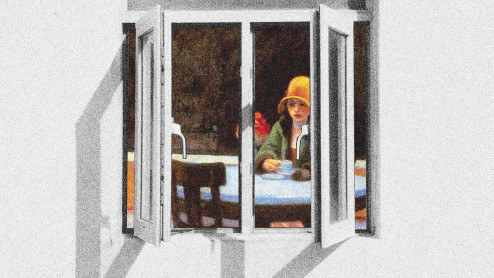